GBC to go tough on illegal transmission of AFCON 2022, as it partners Police against Piracy

The Ghana Broadcasting Corporation, GBC, has cautioned media operators not to transmit the forthcoming AFCON tournament without clearance from the Consortium with the broadcasting rights of which GBC is the Chief Rights Holder.

At a media briefing at Broadcasting House in Accra, Director of Legal Services at GBC, Kwame Wadja, said the Corporation and the Consortium have invested more than €2,000,000 (Two Million Euros) into acquiring the Rights.

”GBC has formed a partnership with the Police, and put in place monitoring mechanisms, and so any Media House found to illegally broadcast any match from the AFCON 2021 Tournament, will find itself on the wrong side of the law”.

Mr. Wadja said  a lot of investment is going to go into broadcasting, citing money and time as the key investments .

“What it means is that if people are investing their time and money to ensure that this comes across into the country, that investment would have to be protected” he said.

The GBC Lead Counsel noted that because of technology, people would like to take exploits, even though they would not like to be part of the investment.

That he said the Consortium would not condone.

The Channel Manager for GTV SPORTS+ George Lomotey, said for those who would like to telecast the tournament as well as sponsor, should contact the offices of the Ghana Broadcasting Corporation, nationwide for assistance.

He said no affiliate of a partner station has the right to telecast the matches.

”The Consortium is also in league with CAF to monitor the signals and so any illegal tapping of the feed will be rooted out”, he stated.

Deputy Director in charge of Public Affairs of the Police Service, ASP Victor Dosoo, said the IGP, Dr. George Akufo-Dampare is committed to prosecuting people who illegally tap into the Broadcast feed.

He said the Police does not take piracy issues lightly.

”Persons who would like to hide under a Corporate entity to commit the crime, should think twice”.

GTV SPORTS+, was announced as the main sponsor with Obonu TV, Garden City TV, Net 2, Angel TV, Metro TV, ETV, amongst others as partner stations that will telecast the tournament as well as numerous other radio stations. 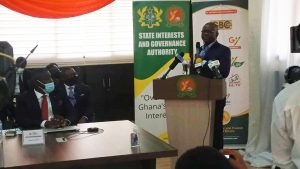 The Ghana Broadcasting Corporation, GBC has exceeded its revenue target for the 1st Quarter by 75% and 30% for the 2nd Quarter. 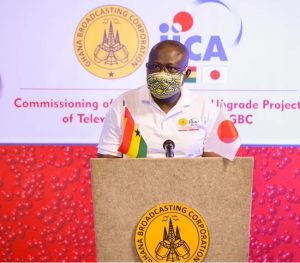 Management of the University at its meeting held on January 25, 2021, considered a letter of intent from Jospong Group of Companies

Executive Chairman of Jospong Group of Companies (JGC), Dr. Joseph Siaw Agyepong, has commended the gallant workers of his outfit for the

Responding to your needs is our priority

Making you feel involve is what set as apart from the others.  We respond to your messages in no time.

The Ghana Broadcasting Corporation is a giant electronic media organization tasked with a mission to lead the broadcasting industry through quality programming, which promotes the development and cultural aspirations of Ghana as well as undertaking viable commercial activities.

Sign up our newsletter to get update news and article about company.

The Ghana Broadcasting Corporation is a giant electronic media (Radio and Television) organization tasked with a mission to lead the broadcasting industry through quality programming, which promotes the development and cultural aspirations of Ghana as well as undertaking viable commercial activities

To lead the broadcasting and communication industry through quality programming, which promotes the development and cultural aspirations of Ghana

To be the authentic and trusted voice of Ghana